Tours and places to visit
384 Hits

ACTIVITIES IN THE CASTLE OF VALDERROBRES:

Built in the 14th century and inseparably linked to the figure of the castle, the church of Valderrobres, it is one of the most splendid examples of Levantine Gothic in the province of Teruel. Despite the many attacks of time and wars, the church has preserved its stylistic purity intact and after a recent and important restoration it looks more spectacular than ever.

The church of Valderrobres can be visited at the entrance of the castle during its opening hours.
The times when religious services take place inside are outside visiting hours.

Since it was opened to the public several decades ago, Valderrobres Castle has offered a privileged setting for the development of cultural activities. Of all of them, the exhibitions, whether of painting, photography or sculpture, have been those that have enjoyed the greatest favor from the visiting public. The interest of many artists to exhibit their works in the splendid rooms and the collaboration with museums and institutions, have guaranteed the continued presence of art within the monument. 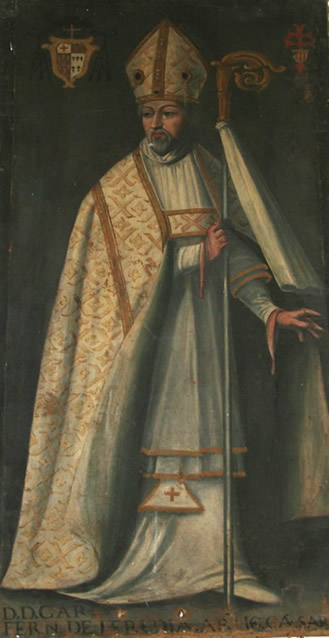 Although the existence of a previous construction cannot be ruled out, the history that we can document of the Valderrobres castle has its beginnings at the end of the 12th century, when, coinciding with the Reconquest, it is shown to us as a defensive tower.In 1307, the Archbishop of Zaragoza definitively became feudal lord of these territories and promoted the construction of the most monumental Valderrobres, starting with the Gothic Church and part of the ground floor of the castle. Starting in 1390, Archbishop García Fernández de Heredia resumed the works, definitively transforming the old defensive tower into a palace that would serve as a residence for himself and the many gentlemen who at that time passed through this area on their travels. After the assassination of Don García in 1411, construction would come to a standstill, but in the 1930s, a new archbishop took an interest in the territory: Dalmau de Mur y Cervellón, one of the great patrons of art and culture. four hundred. Don Dalmau focused his patronage on the completion of the work begun. In addition to his contributions to finish the church, he reformed the second floor of the Valderrobres castle, giving it a more utilitarian approach as a warehouse and finishing the upper rooms, as well as the wall of the parade ground and the entrances. From the 16th century, the castle remained as a rarely used residence of the Archbishop of Zaragoza. Wear and tear and disuse take their toll on it as the centuries progress and only in few exceptions, such as the reforms of Hernaldo de Aragón in the 16th century or the diocesan synod of 1656, does it find something of its former splendor. The coup de grace came in the 19th century, when the confiscations made the building become the property of the State, which meant its abandonment and the beginning of more than a century of ruin and massive looting. Fortunately, from 1980 and especially between 1982 and 1983, the monument began to be restored. In 1991, with the coverage of the distributor of the first plant, concludes & nbsp; for now the interior restoration of the castle and it begins to be used as a regular place for cultural events, such as exhibitions, congresses, music and theater performances ...

Starting in 2003, the parade ground and the counter-terrestrial wall were restored. Currently the castle of Valderrobres is an essential visit for those who come to the Matarraña region and the province of Teruel, as well as the headquarters of innumerable cultural events throughout the year.

Currently we enter the castle through the door used by the nobility in its day. Above it, the shield of seven castles of Archbishop Fernández de
Heredia welcomes us.  We arrive at the Hall, where formerly it was unloaded and from where we can access the main staircase and the Stables. The Stables are the only room that preserves its original ceiling, an impressive pointed barrel vault.

Going up the stairs from the hall, we immediately find the Chapter House. This room on the ground floor of the castle has the peculiarity of being surrounded by a stone bench. Although its original use could be very different, it is possible that in the days of the palace it was used as a waiting room, where illustrious visitors waited for the moment to be attended by the lord.

Already on the first floor, we enter the Hall of Chimneys. It is the largest and most stately room in the castle. Like all those on the first floor, the comfort of the gentleman was a priority and that is why we find up to three fireplaces and five "festive" windows. These windows are typical of many palatial castles and allowed the lord to sit and enjoy the exterior views on their parallel benches. The coat of arms of the Fernández de Heredia family, almost omnipresent on the entire ground floor and first floor of the castle, appears here in a privileged point crowning the room. Starting from the Hall of Chimneys, we access another room that is now open-plan, but which at the time would be divided into at least three parts. The main one would be the one in the center, which would include the first festive window and the fireplace. It would have different uses depending on who was the lord who inhabited the castle, from office to living room.

Next to the Living Room of the Chimneys is the Kitchen, which has a spectacular dome-shaped ceiling over horns that facilitated the exit of smoke from the central fireplace, located on an elevation in the middle of the room. The kitchen had a serving hatch to quickly serve food in the living room, an oven and a drain. The Kitchen has one of the most curious architectural features of the castle; the tubes that chamfer the corners and double the number of sides of the plant to facilitate the closing of the ceiling dome. Leaving the kitchen, in front of it, is the access to the pantry. These recently excavated rooms have revealed that it was here that food was prepared and then cooked in the kitchen. Next to the pantry is the water well, which led to a water table below the castle. next to him we went up the stairs to the patio on the second floor.

We left the distributor on the first floor and went up to the second. This is the area where we can best see what remains of the old defensive tower that gave rise to the castle. The cusp of the natural rock around which it was built still stands out in the center, while the rear part preserves the "loopholes" windows designed to fire crossbows on possible attackers. When in the 14th century the building became a palace, this area became a courtyard similar to the cloister of a convent or monastery.

We will reach the upper rooms by a metal staircase that replicates the layout that the original wooden one had in its day. Although today the upper part of the castle constitutes one of the greatest attractions of the monument due to its spectacular views, in its origins, the fundamental utility of these rooms would be to be simple barns, used from time to time as rooms for the service, from which it was accessed to the coastal path and the battlements.

Going down from the courtyard, we find the service staircase that connected the latter with the back door of the castle. It is much steeper than the front and it must have been quite dark at the time, however and despite all the difficulties it was probably the busiest staircase in the castle, since merchandise entered the warehouses here too. If we continue the descent from the back door, we arrive at what was the most discreet and dark part of the entire building, where the dungeons, the access to the underground and the primitive passage that communicated with the church are located. Finally we arrived at the winery, which had at least three large barrels of wine, whose capacity would be around five thousand liters.

By accepting you will be accessing a service provided by a third-party external to https://hotelelconvent.com/

Publish modules to the "offcanvs" position.